News
CULTURE CODES CAN BE WRITTEN AND INTERPRETED BY ANYONE 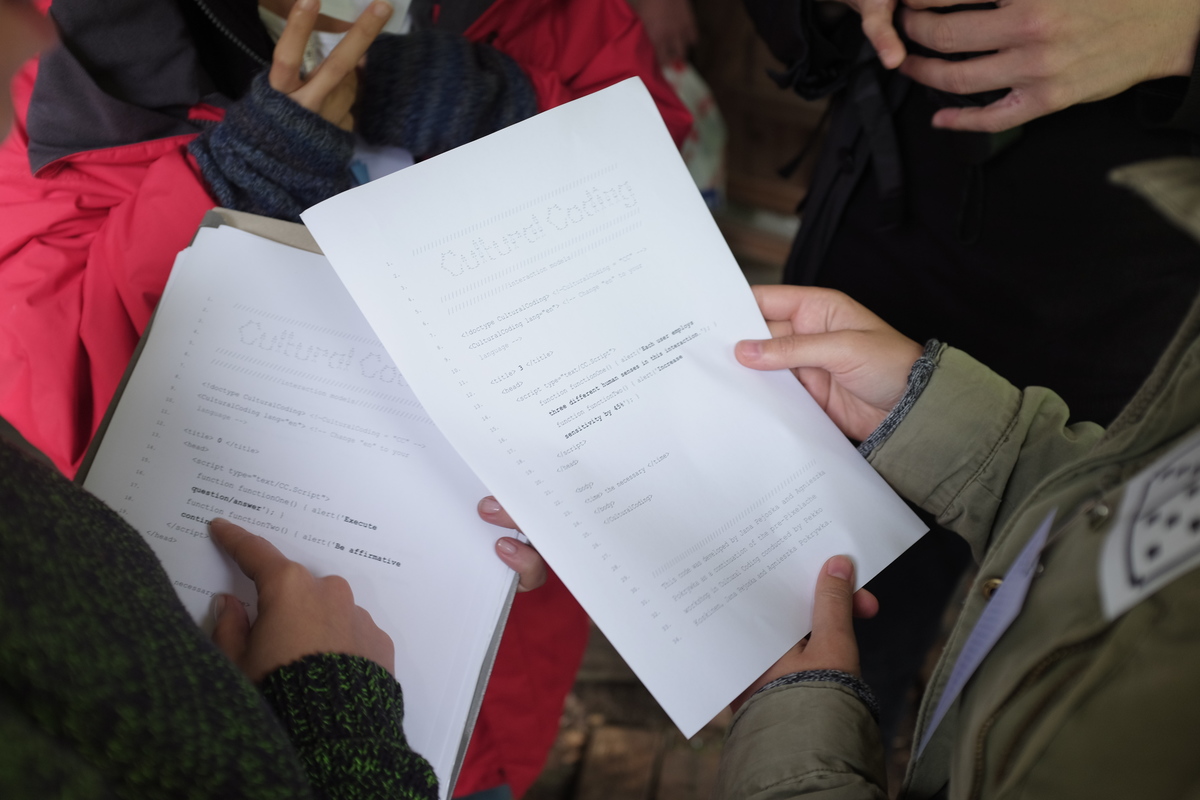 Please tell us how you conceived this project? What is the motivation behind culture coding?

The project was conceived in 2014 by Pekko Koskinen, Ari-Pekka Lappi, and us (Jana Pejoska-Laajola and Agnieszka Pokrywka) in correlation to Reality Research Center. It was Pekko who first brought us together around the idea of creating codes for reprogramming human behavior. From the beginning, each one of us was interested in exploring different areas and having different approaches around this broad theme. Over the years the idea branched even more, making our personal explorations within Culture Coding more diverse. All of these eclectic bits and pieces belong to the one vast field of Culture Coding, and have been featured at Pixelache Festival twice. This year will be the third time; always in a slightly different form, yet always with a new approach.

Coding has a computational connotation used for machines. Programming is a highly logical mathematical method. Why adapt the methodology of coding or programming for humans and social behavior? Do you believe we are ruled by a mathematical structure of communication? Do we as humans need to embrace and entwine our behaviors with bit patterns and machine code?

Norms and codes of behavior are deeply enrooted in our social culture. We could even say that, more often than not, they’re pre-requisites for social acceptance. If we consider the mind of an individual as a system which processes information, we could think about it as being programmable. We are all encoded in one way or another.

Culture coding is a particularly interesting design; it makes existing codes apparent by challenging the thinking patterns and processes that make us who we are. Since every individual is different, communication cannot be as predictable as math. Interpretation is a unique trait, a very complex and beautiful one. This is why each code should be processed differently.

From higher to lower languages, from assembly code to Javascript, programming languages constitute a Tower of Babel. What language, what syntax will your project adopt or prototype, given the multiplicity of human cultures and languages? Why? Please elaborate.

Culture coding, as a concept, loosely refers to bit patterns and machine code. After all there is as much to re-learn from technology originated by humans, as from nature from which humans originate. That has nothing to do with creating a coherent and homogeneous language or syntax. In contrast to computers, humans don’t need that for understanding, creating, or interpreting. Culture coding wants to serve and refine human capabilities, instead of training humans in computer-like skills which we will never be able to fully master. Culture Codes can be written by anyone and can be interpreted by anyone. We were born with those skills.

What behaviors are you aiming to reprogram? Is there an overarching theme? How can automated behavior be used as a tool to redesign itself? How can you tell that the richness and authenticity of human communication and behavior will not be sacrificed to the computer, algorithms and coding?

In this session of Culture Coding, the theme includes the exploration of some psychological patterns of our cognitive bias. Culture Coding here would be used as a technology, a sort of facilitator to understand the way our own brain usually works, and how we deduce things. There will be no specific goals to reach, only experiences to be gained.

Human behavior is deeply embodied. How will culture coding address embodiment? What are these other dimensions, individual interpretations and unpredictable co-creation of multiverses you mention that will be incorporated? Why? Will the resulting code developed in the project be executable by a computer or a robot?

Human behavior is indeed deeply embodied. For that reason, during our participatory session in the frame of Pixelache Festival 2017 we will play with “wearables”. We will collectively look for the expanded uses of this technology. We are aiming to prototype experiences where “wearables" (particularly smart watches) are not only limited to quantify ourselves, but additionally spot behavioral patterns, sharpen your attention, and understand cognitive biases. These are different for every individual, therefore the codes and their executions will vary too.

What are the practical analog or digital tools you plan to use in this project? What will be the format of the workshop and how will the data be handled? Will participants own their codes or will this be an open shared project? Please elaborate on the methodology of the co-design session.

We will have individual and group sessions where the participants will create their own culture codes to test and consider what kind of user experiences can be achieved by interacting with them. This will be a prototyping, co-design session with basic tools like pen and paper. Another part of the session will be the envisioning and planning of these codes in a digital format that would be installed on wearable devices in the future. There will be some smart watches to explore too. The participants will be able to take the codes that they make at home, and would be credited for their contribution to the wider research project under the umbrella of Aalto University and Culture Coding development.

How does your participatory co-design / prototyping session address the festival theme of Local and Decentralized Governance? Is it in anyways shaped to address peer-based resource distribution or decentralization? If at all, in a larger context, how do you see your culture coding project alleviate the contemporary issues and conflicts of the world?

In the same way that a landscape is made up of myriad elements, the current issues and conflicts that happen in our world are often the result of complex, automatized human behaviors. Those, whether in relation to others, ourselves, work, tools etc. are a by-product of the restrictive system that we live in. By working directly on the personal habits, we can little by little tackle the governing systems at large. Furthermore, Culture Coding embraces a multiplicity of will, collective design, and peer-to-peer interactions that are so important to govern in local and decentralized manner.