News
OUR TOOL FOR INTERCONNECTIVITY DURING THE FESTIVAL: POIETIC GENERATOR 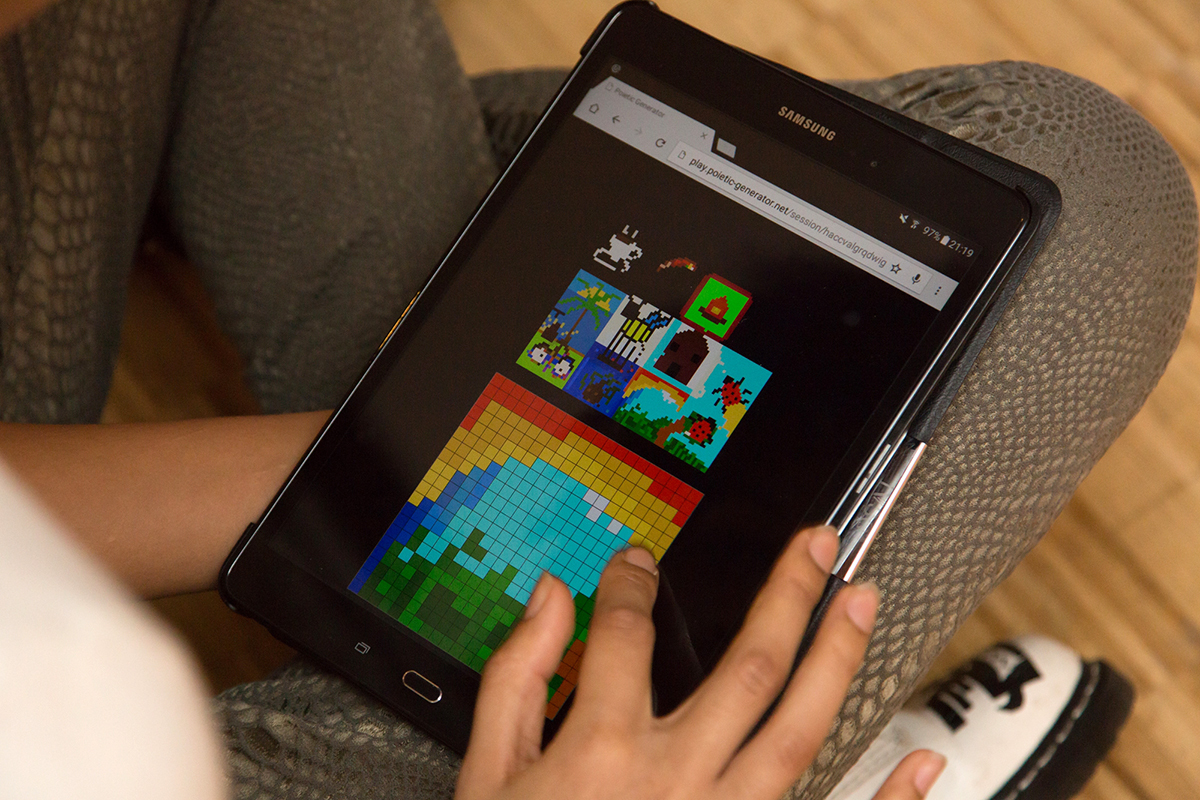 Interview with Olivier Auber, the inventor of Poietic Generator, the game

will be installed at our festival premises thoughout the whole festival.

What led you to come up with Poietic Generator (PG) in the first place? What were you trying to discover or achieve?

Since I am a science fiction fan, I wondered for a long time about the promises of science and the extrapolation of technologies. The networks in particular promise us to be all interconnected, to be here and at the same time elsewhere, and to form one living and active community, together with artificial species such as bots and AIs.There are several models for this: for instance the noosphere of Teilhard de Chardin or the Global Brain dear to cyberneticians. For me, a book by Philip K. Dick, called VALIS (Vast Active Living Intelligent System), was the click. I saw, and it has been a revelation, how to achieve such a system where humans and artificial beings could find their legitimate status, I mean, only a kind of functional model of this system... It was late 1986. As early as 1987, a prototype began operating. Then I realized that the PG raises tremendous questions to which I could not answer by myself. That's why I envisioned it as the object of a very long-term research in which many other people should give their insight.

I find the PG to be a simple yet profound prototype of a participative system. Wish this could be applied in people’s daily lives in some way to address community needs. Has there been any such initiative? How do you see the PG working for a local community?

Everyone knows that there is an extensive loss of meaning, purpose and guideline on planet Earth for the moment. Perhaps the first need of individuals and communities is to redefine them. The PG is not meant to be used for anything specific, except to think about what we do when we communicate through networks. Indeed the PG is a reduced model of all the networks that we practice on a daily basis, and also systems of governance: states, cities, villages, friends and families. Unlike all these "real" networks where there are many opaque aspects, everything in the PG is known or knowable. In practicing the PG, everyone can observe how in some cases the community coordinates wonderfully, and how at other times it can give in to panic and self-destruction. There happen all sorts of mysterious phenomena in our networks. I am not the first one to study them and to try to act on them indirectly. This has something to do with some political or religious attempts to channel violence. Also with ancestral games such as chess, Go, or Yi-king. Today, these phenomena are the central subject of game theorists, cognitive scientists and many other researchers, even in quantum mechanics. But they act as if they live outside the phenomenon they are studying. Obviously, this is not the case. The worldviews they have, and more generally the conception that everyone have of these phenomena, influences the phenomena themselves. There is no model for predicting the dynamics of a network in which all agents try to predict the predictions of all others. For example, nobody holds a Great Model to predict the evolution of financial markets in which all actors act with their own predictive models. We just observe that markets form bubbles and repetitive crises always more catastrophic than the previous ones. Assuming that such a Great Model exists one day, how could it predict its own influence on the dynamics and evolution of networks once it is recognized and applied by all its agents? This question of the feedback of the model on itself leads to an aporia to which are confronted all attempts of modeling. However, I recently rephrased the research program in which the PG could take part and I tried to communicate the magnitude of the challenges it faces. This program is called STI (Search For Terrestrial Intelligence) (i) in reference to SETI which is interested in Extra-Terrestrial life. Like SETI, STI includes a component called STI@home in which everyone can easily participate. To do this, one can practice the PG from time to time on a mobile phone for example, and host at home one of its replicas: a simple display that broadcasts non-stop its global image in real time.

(i) Search For Terrestrial Intelligence

Without verbal communication, the PG achieves a lot. Yet it seems to me as an isolated non-human system depending solely on visual interaction with a computer interface. How would it be if there was to some degree, lines of communication as mediators? Would it sabotage the experiment? Would it negate your objectives?

I don't see the PG as an isolated non-human system. On the contrary, I use to say it is a "100% human cellular automata". Unlike Conway's "game of life" where bits are activated by bots, in the PG everything is activated by humans. Far from being isolated, it is connected to the world through the participants' cognition.  As I suggested earlier, the emerging behaviors of networks are very sensitive to the preconceived models and ideas of its actors. A human mediator who don't take part in the game may impose an injunction such as "you must collaborate", or a target, eg "the result must represent this or that". In this case the network responds to this idea, play with or fight against it sometimes. In all cases, the result is less unexpected than when the actors are left to their own devices. It will just reflects the mediator's input. When I introduce the game, I do it in a very minimalistic way: I explain the principle, the GUI, and that's it. Of course, the PG itself exercises some form of injunction, something like "I'm a game, play with me." This is the basic injunction of all networks, but most of them impose also some behavioral norms. 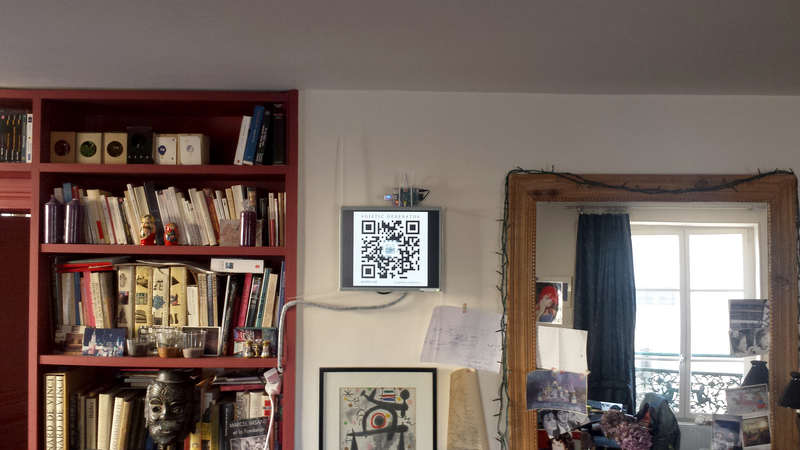 After all these years there must have been plenty of new insights into the nature of collaboration and participation via the PG. Does any particular event or insight stand out? Was there a Eureka moment ever?

There have been thousands of PG sessions held in very different contexts. I remember in particular one of the very first held at the Georges Pompidou Center in Paris (1990) where an African man participated. He didn't speak any known language and he had probably never seen a computer before. A participant showed him how to enter the game. He did it, but his personal sign stayed empty for a while because he didn't understood how to put colors in it. Little by little all other participants changed their colors to take his motionless sign into account. Then I saw the sparkling eyes of the African: he suddenly understood that the world had organized around him ! I remember also great discussions with participants and with scientists, where we tried to understand how things emerge in the image. We have some clue(ii) about that but a lot of mysteries remains.

(ii) Role of Simplicity in Creative Behaviour: The Case of the Poietic Generator

We are excited to host a Poietic Generator workshop at Pixelache. What are your aspirations in context of the Pixelache theme of ‘Local and Decentralized Governance’? Would there be any specific concerns from your side?

After all these years of research, I came to the conclusion that the only thing that could protect people from networks is people themselves. I believe that we learn from our experiences and that we are building slowly but surely a culture that is increasingly adapted to the nature of the environment in which we live. I believe the discussions that will take place at the Pixelache Festival are part of this collective learning and I am glad that the experience I am proposing can contribute to it. For my part, I have theorized this emerging culture as the collective learning the "perspectives" of networks. I argue that, without knowing it, almost unwittingly, we invented with the inception of artificial networks two centuries ago, two new perspectives similar to the optical perspective of the Renaissance. As these perspectives are not visual but involve all our cognition, I proposed to call them "anoptical perspectives". The meaning of my research is to find the conditions of legitimacy of these perspectives (iii). In my view, the unlocking of Local and Decentralized Governance draws big legitimacy questions.

Computational capacities have exponentially grown since the 80s, and complex networked participative systems are possible. What would be the next iteration of the Poietic Generator if at all?

There have been many copycats of the PG. some have been carried out with far more technical and financial means than the PG itself has ever had. The latest is Reddit/Place, which gathered 1.6 million people for 4 days in April 2017. Another is a permanent installation at the Tate Museum in London funded by Bloomberg (2013). In both cases, the rules of the game are slightly changed so that the global images becomes somehow controllable. The images are not actually created in pure real time unlike the PGs' one... Due to lack of resources, the PG was never able to bring together as many participants. For some technical reasons the number is currently limited to 50. But I keep hope that it will one day welcome many more people. The PG is free and open source software. Everything is possible. What I would like is that it will one day become a common and shared game, like Go and chess, or even better, that the PG will to give some reality to Hermann Hesse's dream of a glass beads game.